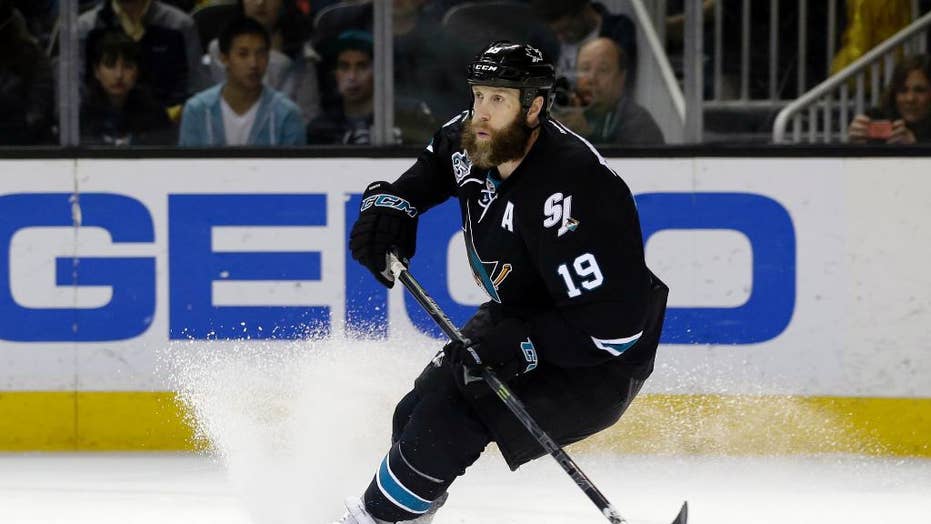 For NHL forward Joe Thornton the decision to leave the San Jose Sharks after 15 seasons was made easier after a conversation he had with Hall of Fame quarterback Joe Montana.

Thornton signed a one-year, $700,000 contract with the Toronto Maple Leafs on Friday, ending a long chapter in San Jose where he leads the franchise in assists with 804 and is second in total points with 1,055.

MIKE ‘DOC’ EMRICK, BELOVED VOICE OF HOCKEY IN US, RETIRES

It’s a difficult decision for any athlete to leave a franchise where they spent the majority of their career.

"It was probably the hardest hockey decision I've ever had to make,” the 41-year-old forward said according to NHL.com. “But I truly believe Toronto, with the roster they have with the guys they picked up this offseason, I think this team is ready to win now.”

Thornton’s decision to leave was no easy one. He spoke with former teammates Patrick Marleau and Joe Pavelski about their departures from the team but said the best advice he received was from no other than legendary San Francisco 49ers quarterback Joe Montana.

"Joe gave me some good advice," Thornton said during a video conference call on Sunday. "He just talked about leaving San Francisco and going to Kansas City."

"That conversation meant a lot …  I'm just blessed that I had a chance to talk to some great people. But he was one guy that offered me some good advice."

Montana was drafted by the Niners in the third round of the 1979 draft. He played 16 seasons for the franchise, and won four Super Bowls and three Super Bowl MVPs before being traded to the Kansas City Chiefs in 1993.

Thornton was drafted first overall by the Boston Bruins in 1997. He played eight seasons before being traded to the Sharks in 2005 -- a controversial move by former general manager Mike O’Connell.

CLICK HERE TO GET MORE SPORTS COVERAGE ON FOXNEWS.COM

In his 22 years, Thornton has become one of hockey’s greats. He ranks seventh in assists and 14th in points in league history but has yet to capture the coveted Stanley Cup -- his biggest push for joining the Leafs.

“I didn't win a Stanley Cup and I think this is a great team that can do that. There's a couple of things that helped along the way, but I really, really like this team. I love the organization.”

Paulina Dedaj is a writer/ reporter for Fox News. Follow her on Twitter聽@PaulinaDedaj.