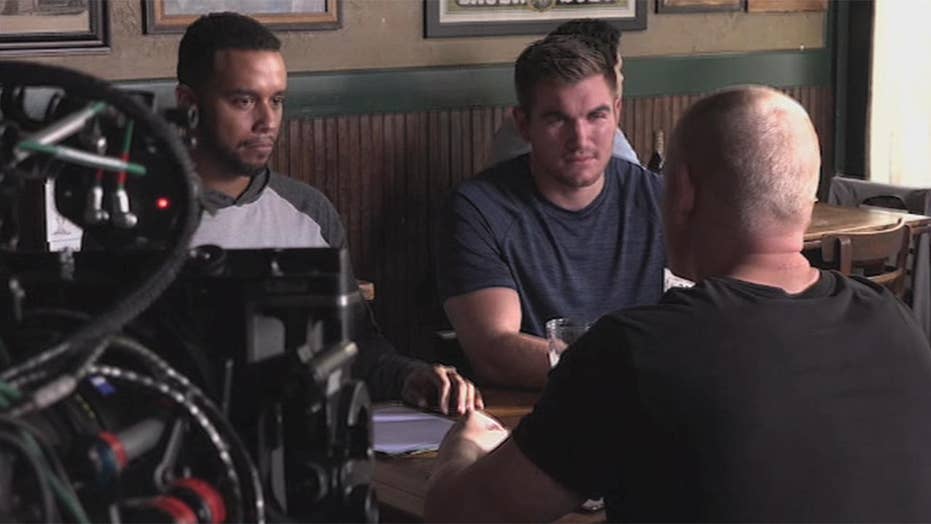 Clint Eastwood taps Anthony Sadler, Alek Skarlatos and Spencer Stone to play themselves in new film that tells the true story of three young Americans who stopped a terror attack on board a train while traveling through Europe.

Real-life heroes from the new film "15:17 to Paris" visited the "Fox and Friends" studio on Wednesday and opened up about starring as themselves in the action-packed film.

"You know it’s something we never even thought of as a possibility," Stone explained. "[Clint Eastwood] actually called us down to his office...and we were just kind of randomly sitting down on the couch like this and he said ‘Hey what do you guys think about reenacting things for us?'"

Admitting that they were confused by Eastwood's question, Stone asked, "Mr. Eastwood are you asking us to play ourselves?"

Eastwood wanted the film to feel authentic so he even cast one of the passengers who got shot as himself along with his wife.

While on the train to Paris, Stone explained that a terrorist with a fully loaded gun came out of the train bathroom ready to open fire in the passenger car. Two other passengers attempted to stop the gunman but were unsuccessful and one of the men was shot in the back.

The friends decided to take matters into their own hands and worked together to stop the terrorist. When asked what it is was like running directly towards the terrorist Sadler said, “Visually you see it so you can register what’s happening but in your mind your thinking: This can’t be real."

The three men went on to say that watching themselves reenact what happened to them on that day was nothing short of surreal.

“If there’s one thing about this movie – it’s accurate,” Stone said explaining that what viewers see on the screen is true to the real-life event.

The three heroes said they have all picked up the acting bug.

“[Eastwood] just told us to be ourselves and luckily since it’s pretty much all three of us playing ourselves, we pretty much were able to relax and have some fun,” Skarlatos said. “There was a script but we ad-lipped a lot and if there was something we wouldn’t actually say we would change it.”

You can find Morgan M. Evans on Twitter @themizfactor.